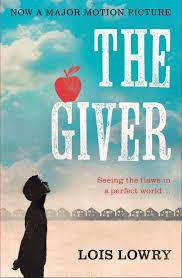 I decided to read this book because it is shortly to be released as a film. I read a review of it on goodreads and was surprised to find that there was a lot of stuff written about it. The book was written in 1993 and follows the life of Jonas. He lives in a community where everything is the same. Children are given to ‘parents’ and brought up following a very strict system. When they are 12 they are allocated their positions within the community and work until the can join the old. The old are then looked after until they are no longer useful and the ‘released’. It is pretty easy to work out what that means but Jonas thinks that  they have this wonderful ceremony where they recount all the marvellous things that the old person has done and then set free…. Set free to where?

Jonas is allocated as the position of ‘receiver of memories’; a special job that is unique within the community. He has to meet with a man called ‘the giver’ who will pass along memories to him. It becomes clear that the community has given up things like this. They are given tablets to repress their sexual appetite, do not have relationships and feel no emotions. Jonas is given the gift of all these so that he may pass them along in his turn. There is an interesting section where he asks his ‘parents’ if they love him, their response is  alarming. Jonas’ father is a Nurturer. He works at the Nurture Centre looking after the newborn children until they are ready to put with a ‘family’. There is a sinister feeling to this, the child they look after in their home, Gabriel, is obviously cared for, but only in a practical sense. If he does not shape up, he will be ‘released’ too.

I can see why this book has been so talked about. They study it in American schools and it is easy to pigeonhole it as utopian/ dystopian fiction. What starts off as an idealistic portrayal of  society quickly deteriorates into a controlled regime where mind control and chemical suppression is normal. As with most dystopian fiction the main character realises the danger that they face and tries to escape it, you will need to read the book (or watch the film!) to see if he makes it…..