Dorothy Must Die & The Wicked Will Rise – Danielle Paige 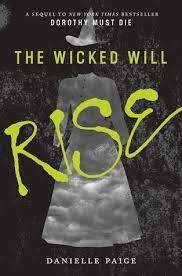 I am reviewing these two together because I read them one after the other and it seemed like a plan! So, the idea behind this series is that Dorothy went from Kansas to Oz where she met Glinda the Good Witch. They killed the Wicked Witch and everyone was supposed to live happily ever after. Except that Dorothy is human and power corrupts. She saw that there was magic to be had and magic makes you powerful, so she decides to take it. From everyone. By force. So Oz is not a nice place anymore, its ruled by an evil dictator in blue gingham.
Along comes Amy Gumm, also from Kansas, also picked up by a tornado and deposited in Oz. But her experience is very different. She is recruited by the Order of the Wicked after seeing a Munchkin vaporised and the battle begins. she is on a mission: to Remove the Tin Woodman’s heart. Steal the Scarecrow’s brain. Take the Lion’s courage. Kill Dorothy. In that order. She meets some interesting people on the way and, as is life, has to make a few choices.
The end of the first book was a bit frustrating; she partially achieves her mission and you think that some more will be resolved in the next one. it’s up to you whether you think it is or not. I liked these books but there was something missing. I can’t put my finger on what it was, but there you go. The character of Amy wasn’t as interesting as I wanted her to be, the love interest was a bit too brooding and dismissive. The story should have been more attention grabbing then it was; it’s a good twist on the original story but it’s almost like the author got bored half way through. I’m not sure if I fancy reading the next one, this is a classic case of being seduced by a snazzy cover – all style and no substance as they say.