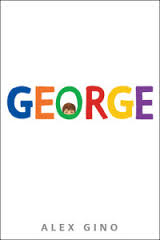 I’m not sure where to start with this book. I chose it because it intrigued to me – a boy who wants to be a girl and how he deals with that. It is a short book and the lines are really spaced out so I read it in a an hour or so. I am not really sure what I thought of it and that’s unlike me because I usually have a strong opinion one way or the other. Several things about it bother me:

1. Who is it for? The cover is all primary colours and the style of the writing is fairly simple – what age group are we targeting here?
2. What is the author trying to say? How is he trying to make us feel?
3. I didn’t really know how to feel at the end of it – uplifted? Sad? Disappointed with society? Impressed at the bravery of a 10-year-old?

Let me explain: George is a boy. He is 10 years old and lives with his mom (we are in America here folks) and his brother Scott is a small town in Upstate New York ( I think, again it’s in America so my geography is going to be terrible!) His mom and dad are divorced and his dad lives quite far away. Scott is a stereotypical alpha male; he drinks juice straight from the carton, smells funny because he doesn’t wash, plays video games and American football. You couldn’t get any more manly than Scott. His mom works hard and is generally quite cross. His best friend Kelly lives with her Dad (not sure where her mom is) and he is a musician – they have quite a retro lifestyle. George and Kelly are in a school where the world is divided into male and female. Boys line up separately, sit separately and try out for the school play separately. Girls play the girl parts and boys play the boy parts. Everyone fits into their gender roles. Except George. We are told about his struggle to go to the bathroom, play sports etc. We are also told that he cries a lot, a common girl trait.
The author wants everyone to fit in except George because he wants us to see how difficult it is for George. This annoyed me, it was a little bit like he didn’t expect us to come to this conclusion ourselves. The problem is that I liked George. I wanted him to get the lead in the school play, I was excited for him when he went on his trip with Kelly’s uncle. I just didn’t like the way the book was written and, as an adult I worry that sometimes kids have too much information and too much choice and they are sometimes railroaded into making huge life decisions before they are ready. I also didn’t like the sanctimonious way it was written. All the adults struggled with it except the head teacher and the kids all thought it was cool. Maybe this is true, but maybe it isn’t. Everyone is different.
There are loads of other fantastic LGBT books out there that deal with things in a sensitive and mature way – sadly this isn’t one of them.