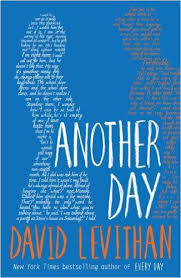 Another Day is the companion novel to Every Day and it is narrated by Rhiannon, the girl that ‘A’ falls in love with in Every Day. I loved Every Day; the whole concept of a soul that is neither male nor female falling in love with someone and then every time it jumps to another body tries to convince her that it loves her. The nice thing about this book is that you already know the story and you know something about the main characters. It’s nice to revisit all the other characters from Rhiannon’s POV and see what she thought of them. The book also explores the concept of how Rhiannon feels about Justin – which kind of lead me to ask what she was doing with this guy in the first place. We know what’s going to happen at the end because we’ve read Every Day but it still made me sad.

But…. I do have a couple of issues with the book. Firstly, it’s too long. If you read these two books back to back then you would find it boring because you are basically going over the same ground twice. If Another Day was a short novella maybe then it would have been better – all the author had to do was re use the notes he had made from the previous book so it left me feeling a little cheated. David Levithan writes really well and I enjoy his books but I wanted more from it. Rhiannon seems like a nice girl with nice friends, she has a bit of a strange relationship with her parents which never really got explained (or maybe it did and I didn’t notice!) but the thing that gets me in the way that she allows herself to be treated by Justin.

This book is essentially a love story with a twist. It’s telling us to fall in love with the whole person, their looks are almost secondary to their personality and the way they make us feel. That is the message that the author wants us to take away here. That’s why ‘A’ is a boy and a girl and a jock and a geek and a Chinese girl and a religious nut, but, and it is a big but, Rhiannon is already in a relationship with someone who destroys her self-esteem, has social issues and generally makes her feel worthless. We do get to look at why he is the way he is a bit but that doesn’t excuse his behaviour towards her and why she stays with him, hoping it will get better.  In this age of social media Rhiannon should know that she shouldn’t have to put up with being treated the way she is; I know that she loves him and we all do stupid things for love but she annoyed me a little bit!

All that said, it is a well written, thought provoking book and a nice visit back to some characters that we already know – which is always nice. There are some other books by him that I would like to read but I think that Every Day is ground breaking stuff that really makes you think about why and who you love and that that decision is up to you. The control that ‘A’ tries to take at the end left me feeling sad and frustrated with him for trying to manipulate two other people’s feelings. At the end of the day, it’s all up to you to make your own choices and then work around them. If you loved Every Day then read it, it is worth it.