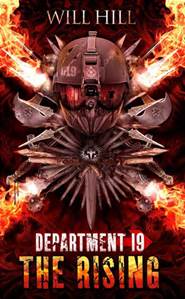 So if you loved the first one that it will come as no surprise that you will love this one too. This book starts off where the last one finished. Frankenstein is dead after fighting with a giant werewolf and falling off a  cliff after the Lindisfarne incident. Jamie and Larissa are now an item but are keeping it secret from Kate, who has a secret of her own. Alexandru Rusmanov is dead but his brother Valeri has managed to find Dracula’s ashes and resurrect him – sort of. Valeri calls on their other brother, Valentin, currently living quite pleasantly in New York, to join the battle and attack Blacklight and kill them all. He’s not to keen on this and comes up with a plan of his own.

The other part to this story is that Frankenstein is not dead but has lost his memory. He is lost in Europe but a nagging memory makes him head to Paris where he meets his old ‘friend’ Latour. He ends up in this weird version of hell with a crazy vampire called Lord Dante, the self proclaimed Vampire King of Paris.

Jamie is settling in at Dept. 19, as are Larissa and Kate. His mother is now, unfortunately, a vampire but she lives quite happily in the secure basement and he goes to visit her. They are all supposed to still only be about 16 so they have a lot of responsibility on their shoulders. Jamie is also a pretty angry bloke. He befriends the doctor who is doing secret experiments in the secret lab and discovers that he is trying to find a cure for vampirism. Sounds like a good thing right? Hmm, well wait and see. There is also the appearance of another character who everyone assumes is dead but is also on a quest to find the cure so that he can save his wife.

This is a big book. I loved it. I was a little bit excited to read it and cannot wait to read the rest- they are so well written and gory and just a bit crazy, but I think that’s why I like them. I did also really like The Enemy Series by Charlie Higson so that might be why! The idea that the government has a secret department to deal with the supernatural is kind of conspiracy theory gone mad, but how exciting if it were actually true! I also like the historical element of it. I liked the way that it had a split narrative in the first one and this isn’t quite the same but, there are some bits set in the past and it fleshes out some of the main characters and how they got to be in Blacklight in the first place. Also, because of the first one it’s difficult to know which people to trust, especially in the organisation.

If you haven’t read this series then why are you ignoring me?! Get to it….

Further reading: Bram Stoker’s Dracula, Frankenstein by Mary Shelley and anything gothic. Also The Enemy Series by Charlie Higson but definitely not Twilight – it’s too wholesome!