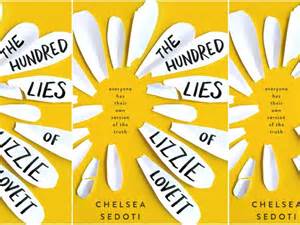 This a also a pre release copy from Netgalley. This book is due to be released on the 30th January 2017.

The main pretext of this book is almost identical to the 1980s film Stand by Me starring Will Wheaton and River Phoenix. If you put the two stories together it would be pretty difficult to tell them apart. The more I read the more it made me think about this film and how much I loved it. Anyway…

Lizzie Lovett is the stereotypical cheerleader at High School (we’re in America – Griffin Mills to be exact). Everyone loves her or wants to be her. Hawthorn Creely was one of those girls and her brother Rush – typical high school jock – dated her. Hawthorn has a surreal meeting with her and thinks they are friends but instead of sharing her feelings with her she is humiliated by her instead. Five years after her humiliation Lizzie has left school and Hawthorn is a loner with no friends, except the musical Emily. She sits behind the gym to eat her lunch and is periodically humiliated by most of the other students, including a very nasty character called Mychelle (yes its really spelt that way!) One morning Rush comes down to breakfast and announces that Lizzie has gone missing while camping in the woods with her older boyfriend, Lorenzo. He seems pretty upset about it and Hawthorn is ascerbic. After all, he hasn’t seen her for years. But the more the story unfolds, the more Hawthorn is fascinated by it. As the days go by she tries to find out more. She goes to the café where Lizzie was working and manages to get herself a job there. She meets Lizzie’s boyfriend and offers him a theory as to what she thinks happened to Lizzie in the woods. I’m not going to spoil it for you but lets just say, it involves werewolves. Pretty soon she has taken over Lizzie’s life. This doesn’t help with the bullying at school.

There is also the situation with the hippies in the garden. Hawthorn’s mum is a hippy and a vegan. Her group of friends arrive and camp out in the garden, led by the enigmatic Sundog. They are all a bit crazy but, as Hawthorn slowly falls apart they are a great support to her, helping her figure out what is going on in her head. If you have seen Stand by Me then you will know what happens at the end. It has an inevitable conclusion and, like Occum’s Razor, the most obvious theory is also what happens. There is also a whole host of supporting character’s but Connor is my favourite; the silent constant.

At the beginning I didn’t really like Hawthorn. I could see why all the other kids thought she was weird. She is horrible to everyone, including her best friend, and thinks that the world owes her something because she has a rough time at school. Get over it, I thought. She grew on me though. I think that she needs professional help but….. The saddest thing is that, in so many of these books it shows how much your school days define you. Like in Tommy Wallach’s We All Looked Up each character had their role to play in school life. I didn’t go to school in America but I can imagine that this is what its like. Luckily for us in Blighty  there is less of this pigeon holing and we can be a bit more free with our characters. Plus, and I will tell you this for free, every time you start somewhere new you can reinvent yourself. You don’t have to be the person you were at school, the only people who will suffer from this are the popular ones, and this may be the key as to why Lizzie disappears. Perhaps she could never attain the popularity and adoration that she had when she was at school and everything after was just a dull imitation of life. I also didn’t like Enzo, he is a real messed up creep.

it’s an interesting interpretation of small town America and some of the characters were really well done. Rush isn’t in the book too much but he is the kind of older brother that we should all have. If you see it on the shelf, try it.

Further watching: The classic Stand By Me.

Further Reading: We All Looked Up by Tommy Wallach, All the Bright Places – Jennifer Niven