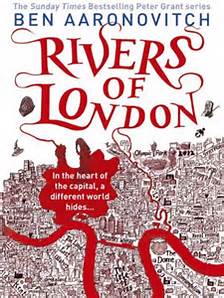 I read this book ages ago but was debating about whether to review it on here because I’m not sure exactly what genre it sits in. I read books 3 & 4 over half term and concluded that, although there is some sex and violence, it’s no worse than some other YA novels and the writer Ben Aaronovitch also writes Doctor Who episodes. Can you get much cooler than that?!

The book begins with PC Peter Grant. His mum is from Sierra Leone and his dad is a white jazz musician who probably takes a bit too much coke; which Peter has to ignore in his professional capacity. He is securing a crime scene in Convent Garden when he bumps into a ghost. He was previously unaware that he could talk to ghosts so it was a bit of a surprise. His partner is the switched on (and gorgeous) Lesley May and when he isn’t trying to get her in to bed she is giving him her sage advice about how to get on in policing. Peter is a born and bred Londoner and I suspect that the author is too because the wealth of information about London is amazing. Peter is absorbed into a section of the Met run by the enigmatic (look it up people!) Nightingale who seems to have been alive for a very long time. He drives a lovely jag and lives in a place off Russell Square called the Folly with his dog Toby and a very strange servant type lady called Molly.

As Peter starts investigating a murder and other magical goings on in London, Nightingale explains to him that all the previous magicians were killed in an offensive during WW2 and he is the only one left. Peter is the first apprentice magician for 50 years and magic takes an awfully long time to learn.

This book is witty, entertaining, funny, a little bit rude – and brilliant. If you love Doctor Who you will love this. The series is currently five books and The Hanging Tree is being published in the next couple of days. Aaronovitch is so knowledgeable about London, police procedure and rivers (this will become clear when you read the  books!) that you become absorbed in his world. The Faceless Man is a little like ‘he who shall not be named…’ and there is a lot of tongue in cheek references to HP but, if you enjoyed them and are looking for a new series to become obsessed with, look no further.