Thanks for the Trouble – Tommy Wallach 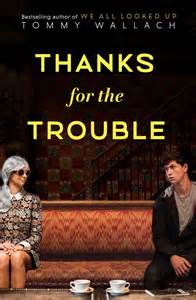 I love Tommy Wallach. His writing is amazing. His descriptions of relationships is so good it makes me want to cry! He describes Parkers parents as ‘loving each other like the sea loves the sand. Slowly wearing it away…’ sad but so good.

Parker Sante is 17. His father died in a car crash and he hasn’t spoken since, he is an elective mute. He communicates by writing messages in notebooks, if he wants to communicate at all. He also doesn’t go to school and hangs out in hotels stealing things off rich people. This is how he meets Zelda. She is sitting in the hotel having breakfast and pulls out a roll of bank notes. She then leaves her bag unattended and he steals it. Unfortunately he leaves his notebook behind with all his contact information and, unusually for him, he also has a pang of conscience. He returns and they start to communicate. She tells him that she is going to spend all her money and then jump off the Golden Gate Bridge. She is just waiting for a phone call and then she’s gone. He is determined to stop her.

So begins a love story. Parker isn’t the most social of people but as you go through the book you realise that that’s because he has deliberately cut himself off. People are willing to give him time but he choses to isolate himself . His friend from Chess and War (it’s a club where you can read about war and play chess, perfect if you don’t want to talk to anyone!) are really geeky and nice. Parker realises that he wants Zelda to stay so tries to show her all the amazing things that life can offer. The problem is that Zelda has been alive for 246 years and has seen it all. She tells Parker that she is immortal and that she was born in Germany in 1770, been married, seen wars play out. She is tired of life and has decided that she wants to end it.

It’s up to you to decide whether she really is immortal or just at the end of the road. I’d like to think that she was but a small part of me also thinks that she needed to concoct a story that allowed her to make the decisions she makes. She sure has a good time though! This is a book about redemption. Parker and his mum needed someone to rescue them, even though Parker thinks he is rescuing Zelda it feels like it’s the other way round. Parkers mum is a mess after his father’s death and is drinking way too much, another problem for Parker to deal with.

It’s a lovely book. I really enjoyed We All Looked Up and it seems to be enjoying some cult status. Tommy Wallach’s way of speaking to the reader is so good you feel like he is sitting next to you reading out loud. Read it all in one go, you will want to go to San Francisco after! But you will also think a bit about why we love people. Treat people like it’s the last time you will see them, you might regret it if you don’t.

One thought on “Thanks for the Trouble – Tommy Wallach”