One of Us is Lying – Karen M McManus 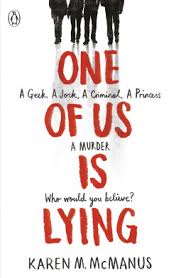 Hands up if you have seen the awesome 80s classic The Breakfast Club? High school kids stuck in detention, all different types, don’t really know or like each other and then they are all stuck in the same room and end up having this amazing experience? WHY NOT??? This film is fab and I demand you go and watch it this evening….

Well, this book is unashamedly similar, except one of the students who goes into detention doesn’t make it out again. Bronwyn, Cooper, Nate, Addy and Simon are all in detention on a Monday afternoon for being caught with their mobile phones. Except all the phones they were caught weren’t their own, but were found in their bags. Weird coincidence number one. While they are all there, the teacher leaves for a second and there is a car crash in  the car park which they all go and look at out of the window. The next thing you know, Simon falls down and starts  gasping for breath. It is well known that he has a peanut allergy and quick thinking Nate tries to find his epipen. It’s not in his bag and one of the others runs to the medical room to get a spare; there aren’t any.  Simon doesn’t make it  (this isn’t a spoiler, it tells you this in the blurb)

The other four narrate the story and all have something to hide. Simon is the author of an online gossip website called About That and has been writing nasty things about other students, he isn’t exactly Mr Popular. So when it’s discovered that he has been deliberately killed they are all under suspicion. Bronwyn is the clever type who is just trying to get though high school and into Yale. Cooper is the star baseball player who is just about the get a full scholarship and possibly play in the majors (this is important if you play baseball apparently) Nate is the school drug dealer and lives with his alcoholic dad, his mum has disappeared. Addy is dating Jake, a thoroughly nasty jock who is a total control freak. That basically sums up Addy’s personality at the beginning of the book.

As things play out and the students all fall under suspicion they start to get together to figure out what really happened. As they start to trust each other more, and spend more time together, there is a lingering suspicion that one of them may have committed the murder. So who did the crime?

I liked the way that, as the reader you experience all the main suspects in their own words, which makes it more difficult to figure out which one (if any) of them might have done it.  As  the groups secrets are exposed and some of them get a bit closer the suspicion heightens. Although I never really believed that any of them were guilty, the lies came out quite slowly so it was exciting to go along not knowing who the murderer was. I also started to really like the characters and really hoped that none of them were responsible!

This is another YA book that references classic stuff but also is trying to encourage you to be an individual. Addy in particular is in an abusive relationship but doesn’t even realise it. Cooper’s secret also exposes the fact that, although American is a first world country, it still has some backward thinking going on!

The twists and turns made me want to finish quickly and I  really enjoyed the ride. A good thriller that will make you go ‘oh!’ when you find out the truth! One to read over the summer I think.

Now go and get The Breakfast club on Netflix , if you love Pitch Perfect hopefully you have seen it already!

2 thoughts on “One of Us is Lying – Karen M McManus”