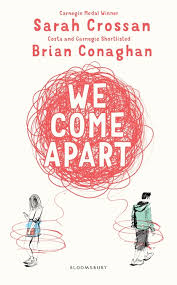 Jess doesn’t have a great life. She lives with her mum and her stepdad, Terry. She used to also live with her brother Liam, but when things got a bit too much with Terry he ran off; Jess hasn’t see him since. Terry beats Jess’ mum and forces Jess to film it so she is complicit in what is happening. Jess  can’t save her.

Both Nicu and Jess are 15 years old and meet when they are both arrested for stealing and put on community service in the local park. They are both on their third offense, Jess got dumped in it by her mates and Nicu stole some stuff from a shop. Nicu doesn’t speak English very well and is struggling at school, not just with the language but with the bullying that he experiences as a Roma gypsy. He just wants to fit in and keep his head down but this is impossible to do. Jess is part of a gang that doesn’t want anything to do with people like him, but during their Saturdays together, a bond starts to form.

Nicu is starting to fall in love with Jess and this makes him want to get married even less. He is worried about not doing what his father wants, but at the same time can’t deny his feelings for the difficult Jess.

Like the other Sarah Crossan books, this is written in poetry form. This makes it a quick and easy read. Don’t let this fool you into thinking it doesn’t have a hard hitting message, and the language is pretty grown up too. The authors are making comments about the social landscape of modern Britain. There is a very large shifting population and many people from Europe come over to the UK to live and work, and bring their children, mostly with the intention of returning to their home countries at some point – with the children who have been educated in Britain. The cultures and rules that they bring with them from other countries are not the same as we have here. By bringing their children here and letting them experience our culture, their world shifts a little. If Nicu hadn’t come to the UK he would not have thought twice about an arranged marriage, or met Jess. The possibilities after their meeting means that he cannot accept what his parents want.

Jess on the other hand is living a pretty miserable life and cannot see a way out. By meeting Nicu, the spiral of her life changes. She no longer wants the life she has, she sees the people she hangs around with for what they are and it pushes her to change the way she sees things.

I so wanted this book to have a different conclusion but I guess life isn’t like that! Inevitably they both see that they can’t carry on the way they are and something needs to  change, unfortunately life gets in the way. I don’t want to spoil it for so I won’t say any more then that but, suffice to say – if you love her other books (and you just need to read my reviews to know that I do!)  then you will absorb this book and finish it in a single sitting. You may even shed a tear or two at the end….