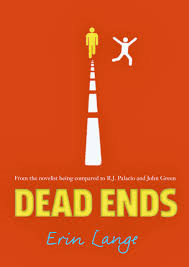 This is the story of Dane, the school bully and his unlikely friendship with his neighbour, Billy D. This is kind of the mirror of her previous book, Butter. I have read Butter and enjoyed it, although the end was not as satisfying as you would expect.

Dane is a typical 16 year old boy. His grades at school are really good but he has a lot of anger. He lives with his mom who is a yoga instructor. She had him when she was in high school and his father has never been on the scene. The books opens with Dane beating up a boy who is driving in a red mustang, a car being something that he doesn’t have and desperately wants, when he gets distracted by another kid staring at him. He describes the need to hit someone as being like a physical itch on his palms. Every time he gets angry his hands itch. The boy that distracts him is Billy D, a new kid in town who happens to live opposite Dane. Billy D has Downs Syndrome. Billy D somehow persuades Dane that if he walks him to school then he won’t get beaten up by the other bullies at school because they’re all scared of Dane. The first example in the novel of Billy’s ability to manipulate people. He ends up persuading the behaviour officer at the school that instead of giving Dane a detention, Dane can act like his personal bodyguard. This leads to a fascinating friendship between the two boys; and they both discover a little about themselves in the process.

Billy D has a map with clues in written by his dad. Billy and his mum have been moving around from state to state to escape him and Dane assumes that he understands the reason for this. As they follow the trail of clues and Dane teaches Billy to fight so that he can protect himself, their friendship grows and Dane starts to evaluate the reasons why he behaves in the way he does. There is a really interesting scene in the canteen when Dane beats a boy up for drawing a picture of Billy which he thinks is offensive, when the reason is investigated a different truth emerges. Along the way they also meet Seeley, who has two gay dads and a bio dad oh, and white hair!

This isn’t your average story about school bullies.   Its a story about two fatherless boys who are a bit lost in the world, but it is also a novel about misunderstanding. Dane is following a path based on a misconception and Billy is generally misunderstood because he looks different. I wish I could say that it ends happily ever after, and I guess in a way it does, but not in the way you would expect. If you have read the book Wonder by R J Palacio then it may give you another view of teens with disabilities and how others view them. This book makes you think about how you treat people because of the way you look and that if you took the time to look beyond what they look like, you may really like what you see.

This author is really insightful about the world of American teenagers and their need to fit into a category. Butter wanted to be thinner so that he can be liked, and when this doesn’t work he takes another option. Dane, Billy D and Seeley are a bunch of kids who don’t fit in anywhere until they find each other and create their own category – yeah for them!