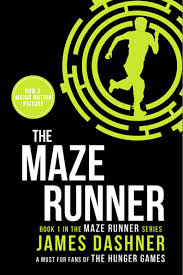 I really, really wanted to like this book. Everyone is reading it or has seen the film; it’s all over the internet and everyone is talking about it. In fact it’s been so popular that I haven’t been able to get a copy from the library and downloaded it on my kindle instead! So, as you can see, I had high hopes.

It really irks me then, when I read a book that is not brilliantly written but that is so hyped and whose author has made so much money. It’s so badly put together that I could have written it myself. The premise is good: a boy pitches up in a world where there are loads of other boys who all have jobs to do in order to help their community to survive. He has no memory of where he has come from but knows his name is Thomas. He doesn’t have any memories of his previous life but he knows how to do things. He doesn’t know how old he is but he knows what a cow is – you get the idea. At the start of the book he hears terrible screaming and is told that the boy has been attacked by something called a Griever; he is then shown a Griever, a hideous mutated creature with robotic appendages which can kill or spike the boys causing them to have hideous hallucinations and flashbacks of their previous lives. Then he nearly gets attacked by a crazy boy and sees another boy who is a runner; a job he wants to do but doesn’t understand. The runners are trying to solve ‘The Maze’, an elaborate construction that they explore every day, hoping to find the way out.  He’s just got his head round all this when a girl arrives in the box and tells them all that their world is ending and they need to get a move on solving The Maze. And he can talk to her telepathically!

It is so badly written that I wanted to get a red pen out and start correcting it! The last quarter of the book was so rushed I wasn’t exactly sure what had happened. The epilogue set the sequel up nicely (for the author to make more money and another film to be made!) It is exciting, it’s fast paced (sometimes a little too fast paced!) some good characters that are fleshed out and you start to like – it has a lot going for it, it’s just the quality of the writing that let’s it down. But I guess if you like this kind of genre then you will love it!

I may or may not read the next one…